My favorite metaphor for the advance of modernity is World of Warcraft’s Looking for Group tool. I’ll explain.

For players who played WoW before any expansions, in the Burning Crusade, and in the first half of Wrath of the Lich King, running dungeons went a certain way. You needed 5 players: a tank, a healer, and 3 DPS. You could organize a dungeon run with your friends or your “guild”, or you could just ask the public over general chat for who else was interested in a run. Finding the tank or healer was often the longer part, but eventually you’d organize a group and head out.

Then things could get interesting. One of your players might be bad and mess up the run. You might argue during the run about who was responsible for pulling too many monsters and leading to a group wipe. Maybe you’d complete the dungeon, but maybe you’d fail. Nothing was certain as you were relying on other people, and a bad argument could descend into harassment and a complete waste of your time (sometimes more than an hour’s worth.)

But, sometimes you’d have a real good time. You could stick it out through a really tough boss and several wipes and all cheer together once you finally killed the jerk. You might meet a really good DPS who cracked funny jokes and you’d add him to your friends list, or even offer him an invite to your guild. And if you met a tank who was patient and helpful and seemed to like you, well hell, you added him to your friends list and now had a tank to ask for future runs instead of standing around town like a pleb. If you were really lucky, maybe the run would go so well that you’d just keep the same group and go to another dungeon.

Social connections were made. They were online, and based around getting loot, but they were real and engaged the social parts of our brain. 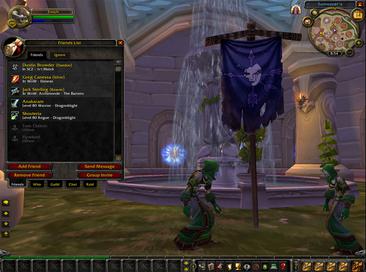 Then, Blizzard saw this and how inefficient and socially laborious it was, and decided to fix it. They added an “LFG” tool (for, looking for group.) Here’s how it worked:

So, instead of coming home and spending an evening doing social organization to play WoW, you logged on, hit the button, and 45 minutes later you’d have loot, all with barely interacting with another person.

This was hugely popular. People loved it. DPS had to wait in line, but it was a fair line and they knew they’d get a run at the end of it. Tanks had instantly available dungeons and no more people bugging them to come run with them. Loot was flowing easily, and bosses were being downed more than ever before. Pretty soon even talking in an LFG group was considered weird and rude, because it interrupted the smooth flow of acquiring loot as fast as possible.

Within months the friends list, of people you met in game and didn’t know IRL, is empty. How or why would you even go about making new friends after all? 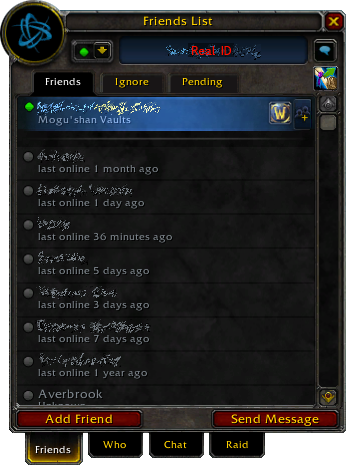 And the loot was good, yeah. But after a dozen quick runs you had all the loot, and why run any more LFGs then. Did you pay for and install a game just so you could have the right electronic sword? Like, what even is the point of a massively multiplayer game when… you don’t interact with any other players as players?

(A few years later Blizzard implemented this for raiding too, the higher end content in WoW, which was one of the main reasons to join a guild.)

So yeah, you get more stuff, and some of the rough edges of bad interactions are rubbed off. Those are the benefits of an ordered tool that does all your social interactions for you.

But, it was lonely. You might log on and play for an evening (again, a multiplayer game you chose to buy) and never talk to anyone the whole time. You might go away for a year, come back, and no one even knew you were gone.

If you value loot, and are very risk averse for bad social conflict, this is fine. If you value friendships and social memories, this is austerity.

Now imagine what I just described as applied to romance, and we called it Tinder. Imagine it for every human endeavor that is become standardized and streamlined and we’re eliminating the difficult meatspace negotiation parts for. Think about this the next time you wonder why, as we have more loot, more sex, more games, and more media that fits our tastes than ever before, we’re also less satisfied than we’ve ever been.

One thought on “Warcraft: LFG”

This is a text widget, which allows you to add text or HTML to your sidebar. You can use them to display text, links, images, HTML, or a combination of these. Edit them in the Widget section of the Customizer.